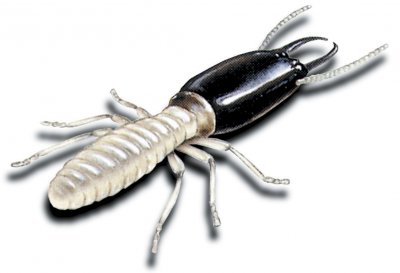 Termite is a true menace for wooden buildings and it can become a real problem for human.

Mighty trees affected by these insects go to pieces from even a slight push, wooden houses become unsteady and unlivable.

In the USA, for example, termites are responsible for $12 billion per year in damage, repairs and prevention costs.

What are subterranean termites? Termites (lat. Isoptera) are the infraorder of eusocial insects familiar to cockroaches. Today, there are over 2,300 described species of termites.

Many of them are found in tropical and subtropical regions such as deserts and rain forests. However, there are more than 50 species that have been found in the USA, Australia and Asia.

Subterranean termites build large colonies under the ground, which are consist of elaborate tunnels and chambers. Worker termites are constructing protective tunnels with mud and saliva so as to reach above-ground wood. Their “diet” consists of wood and other cellulose material. 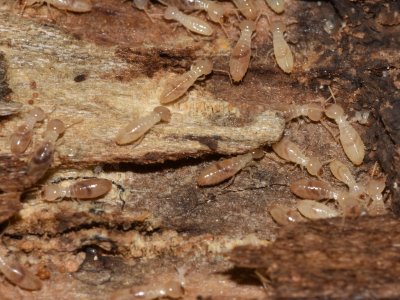 Subterranean termites are divided into the following groups:

How to Identify Subterranean Termites? How do They Differ from Other Termites? 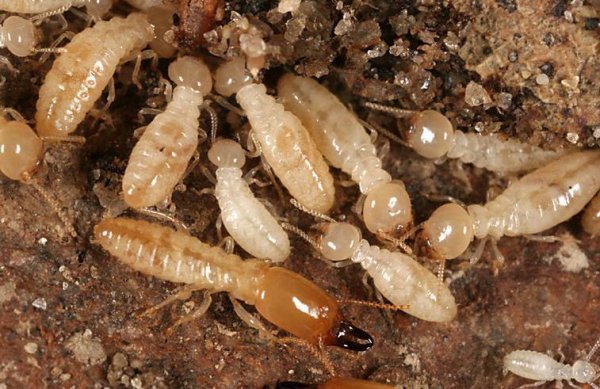 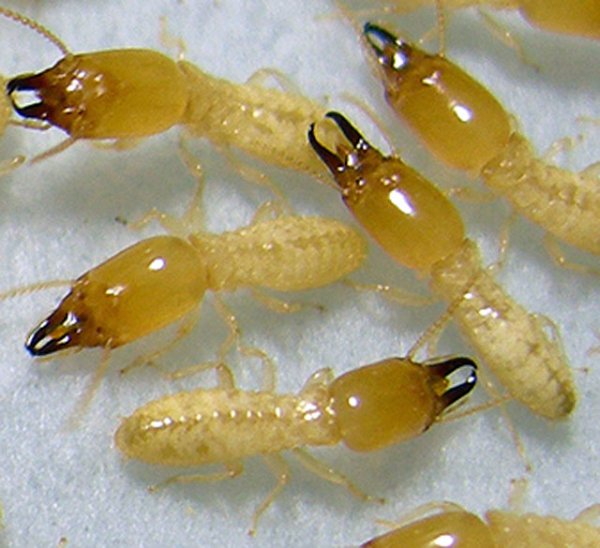 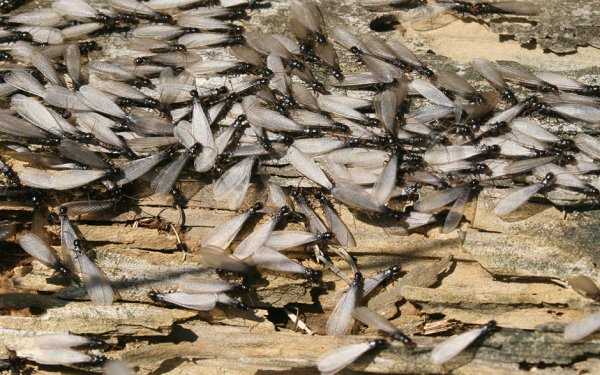 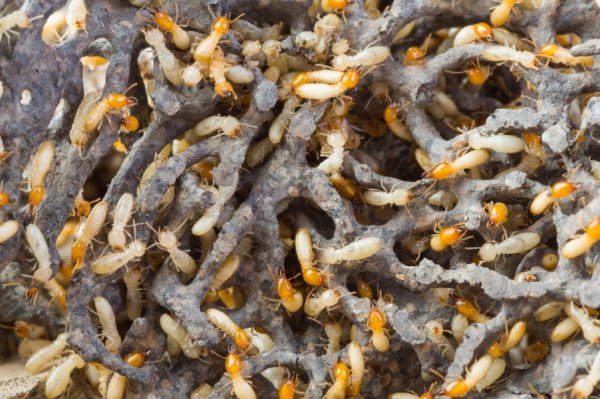 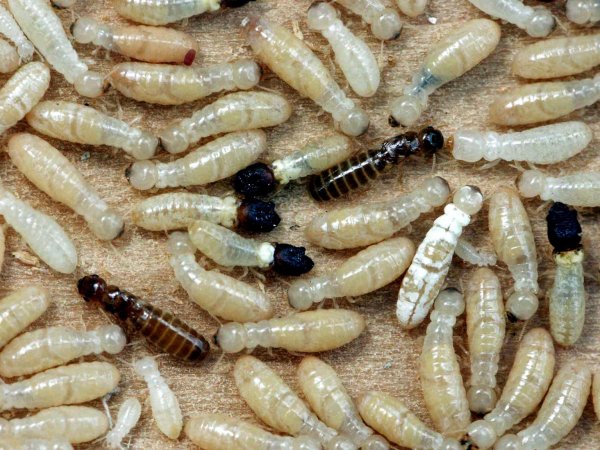 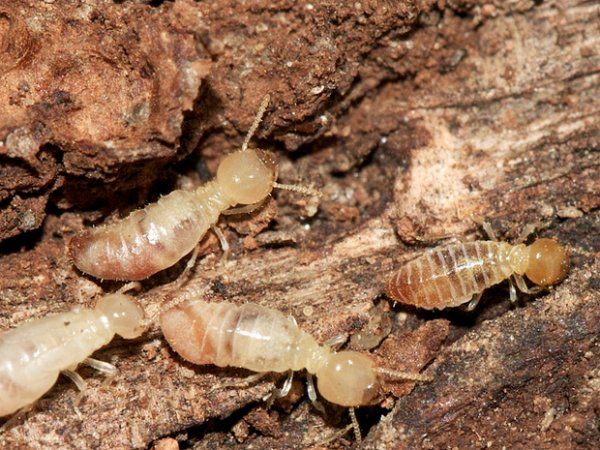 The Life-cycle of Subterranean Termites and Their Hierarchy

The life-cycle of subterranean termites consists of 8 various stages of development:

On the left picture you can see what do baby subterranean termites look like?

Termites, as well as subterranean type, are highly-organized eusocial insects that have well-established hierarchy within the colony.

The queen of the termites has an enormous body comparing to her off-spring, her life expectancy is approximately 25 years, she can produce more than 2,000 egg every day.

The king and the queen lives in separate chamber and are tended by the workers.

Immature (nymphs) are the small-sized off-spring. They are creamy colored and have no wings. These immature termites develop into workers, soldiers or reproductives.

As the nymphs become larger, they also begin to damage wood. Workers and soldiers take care of them until they mature.

Reproductive caste (swarmers, “alates”). These are the adult winged termites that have two pairs of long narrow wings of equal size, dark skinned. They are potential queens and kings.

Worker caste are the largest caste within the colony, and they are the life-cycle that makes the most damage to timber and wooden buildings. They perform all work in the nest.

They gather food (including timber and other cellulose), feed the soldiers, the queen and the king, and take care for young nymphs until they become mature. They toil 24 hours a day for their entire 2-year life span.

Soldier caste belong to another caste of subterranean termites’ colony. They are the defenders of the colony, their principal enemy – marauding ants, with whom they are engaged in ruthless war lasting 250 million years.

Termites require several years to form a big mature colony. The average nest is from 10,000 to 1 million species.

Subterranean termites have well-established social system within their colony and nest, with perfect engineering capabilities and acute survival instinct. These termites obtain moisture from the decaying timber and soil and communicate with the help of pheromone signals.

What do subterranean termites eat? The “diet” of termites mostly consists of timber and other cellulose products. Termites do not eat all wood species, but the condition of the wood is more important for probable infestation.

Reproduction: When, Where and How? 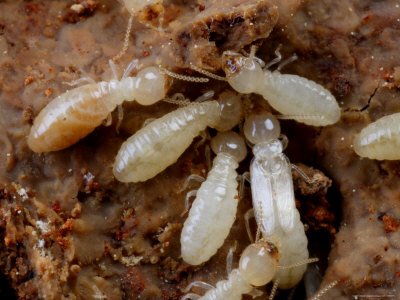 Queen and king are among the termites, capable for reproduction within the nest.

They are the insects that have already lost their wings after mating and perform the reproductive function.

The king is located in the queen’s chamber and it is slightly bigger than a common working termite.

The king continues to mate with the queen during its lifetime, unlike, for example, ants, where the males die soon after mating, and its sperm is stored inside the queen.

The rest of reproductives have wings and are used to create new colonies.

The development of the termites proceeds with incomplete metamorphosis. Hatched from eggs larva looks like an adult termite. After several molts the nymphs are turning into adults.

Winged reproductive termites with wings fly out of the nest, and then mate. The active mating phase occurs during warm spring and summer months.

After the mating the male and the female termites went down to the ground, bite off their wings and set up a new colony, where they lay their own eggs.

In some species of termites, immature reproductives make up a podcast, which is intended to replace the king and queen in case of their death.

Warning! This is a real danger sign that a large mature termite forms a nest near your house. Such a nest can contain hundreds of thousands of subterranean termites within range of infesting the timber of your house.

Where do subterranean termites live?

Subterranean termites live and nest in the soil to obtain necessary moisture, but they also nest in wood that is often wet. They easily attack any wood, which is in contact with the ground. 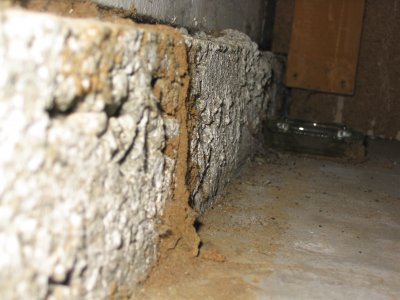 If the wood does not contact the soil, termites can build mud tunnels or tubes to reach wood several feet above the ground.

They can also enter a structure through expansion joints in concrete slabs or where utilities enter the house.

They enter buildings through cracks in concrete flooring or travel even under parquetry or tile flooring through gaps.

Subterranean termites build central nest from which they build underground tunnels that could be 100 meters’ radius from a central nest in search of a timber.

These insect can also build subsidiary nests that may not contact with the ground surface.

More info on how to find their nest.

Termites Inside the Building – How to Identify?

The most crucial factor for subterranean termites’ colony forming is moisture. You are likely to find the subterranean termite nest in moist or damp places inside your house, where the moisture regularly collects inside the wall cavity from leaking pipes, shower recess, faulty plumbing, guttering, broken roof tiles, etc.

There are some signs of termites’ infestation:

Wood damaged by subterranean termites is often not noticed because the exterior surface usually must be removed to see the damage. Damaged wood sounds hollow, and the screwdriver may even break through into the galleries.

Aside from wood damage, subterranean termites are able to damage building insulation. Also, some kinds of insulation have a paper cover, which termites use as food.

The timber, wood and insulation are always tunnel-like with numbers of layers. 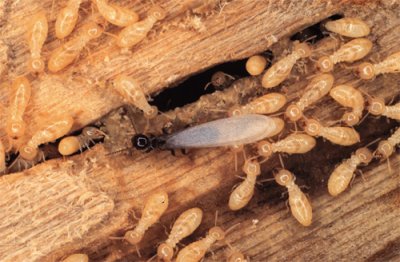 Soil treatment termicides (Termidor, Premise) – are the most effective alternatives for killing termites. Water-based, safe for people and home animals.

Attention! Several outdated termicides are solvents that can cause health problems to asthmatics during the drying process.

It is placed directly into the ground around the outside of a structure which the termites will find, feed on and die.

It is required not to engage yourself in do-it-yourself termite control – better leave this job to experts, because separate actions in this problem are often non-effective and can cause health problems.

Want to get rid of pests naturally? In this video Stephen Tvedten shares how to kill subterranean termites naturally without any pesticides, insecticides or toxic chemicals:

Though termites are the real menace for timber and even stone buildings, still there are ways to eliminate termites nest colony within your yard. It is not recommended to fight these insects yourself – only the highly experienced expert in termite eradication can help you to get rid of termites effectively. 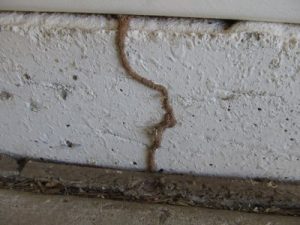 DIY: How to kill subterranian termites by yourself without professional help? 0 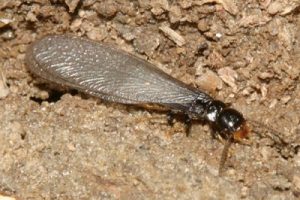 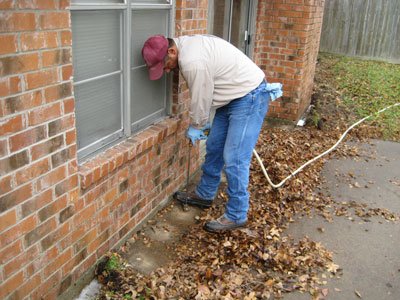 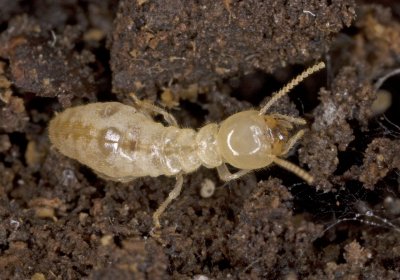