The life cycle of a termite: what are the stages? Who is from colony can start reproduction? 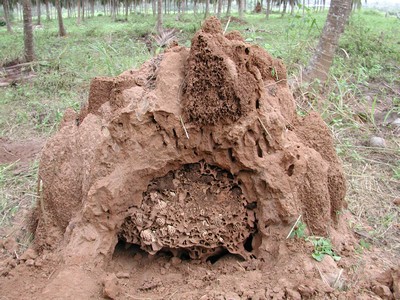 Termites are widely spread all over the world and can be found everywhere except for Antarctic. They are believed to be “silent damagers”, as usually it may be hard to see how much they are destroying your property.

Termites create colonies; their size usually varies: the number of termites may be from a couple of hundreds to millions.

Every colony consists of several types of termites: eggs, larvae, nymphs, workers and soldiers, reproductives, swarmers and king and queen.

The most important part of termites’ copulation is laying eggs. Every year during the same period new swarmers fly out of their nests. Termites’ mating season differs and may be from December to February, from January to April and from February to May. Some choose warm days just after rains, some prefer nights. 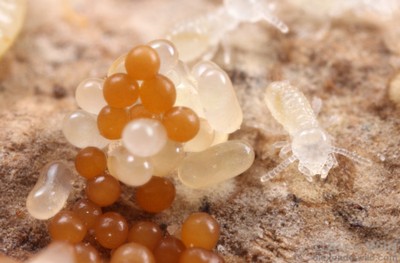 Termite reproduction cycle starts from eggs. At the beginning the queen lays 10-20 eggs, but their number rises slowly and reaches thousands of eggs per day. Eggs are very small, but can be seen with naked eyes. They are of white color, but you will never find them in visible areas as they are located in protected areas of nests. From eggs larvae appear.

They are small, almost of the same size as eggs and white. Unlike usual larvae termites’ ones are not swarm-like, incapable of moving and helpless. Usually larvae are small termite-like creatures which are able to move and have soft skin. Termites are very slow in growth. Larvae will appear only 30-60 days after (depending on a temperature).

Unlike the majority of insects termites miss the stage of case-worm. Nymphs change into larvae. Unlike larvae nymphs are bigger in size and have 4 wing pads. After several sheddings a nymph will become a grown up termite.

Usually nymphs shed their skin 3-4 times. After the first shedding a nymph becomes worker. After some time some insects continue shedding and turn to soldiers.

It takes several months for nymphs to change. The growth depends on food, temperature and how populated the nest is.

Notice! Sometimes the number of nymphs’ stages may differ.

For example, Mastotermes darwiniensis (the most primitive termite) has 5 nymphs’ stages and one soldier stage; it is also of the darker color. But this is not final stage: a soldier may have one more shedding and turn to a nymph with wing pads. After three nymphs’ stages it will become a grown-up swarmer.

We decided to show you some photos. In them you can see all stages of life cycle of termites. The queen and king start reproduction:

The queen lays a lot of eggs: 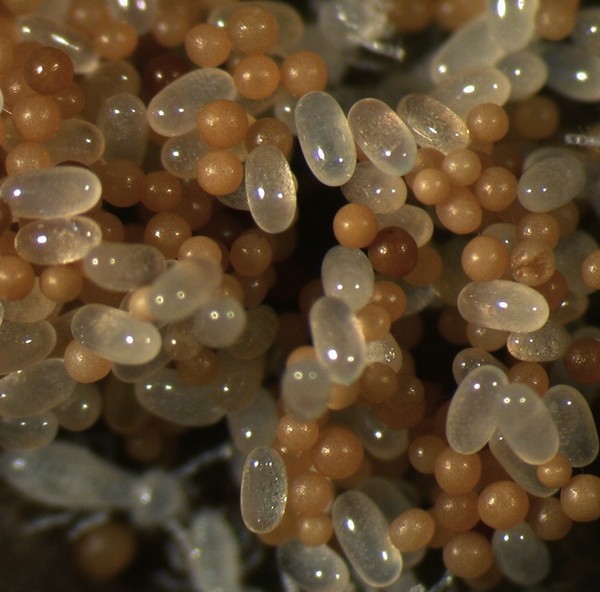 Then from eggs appear larvae: 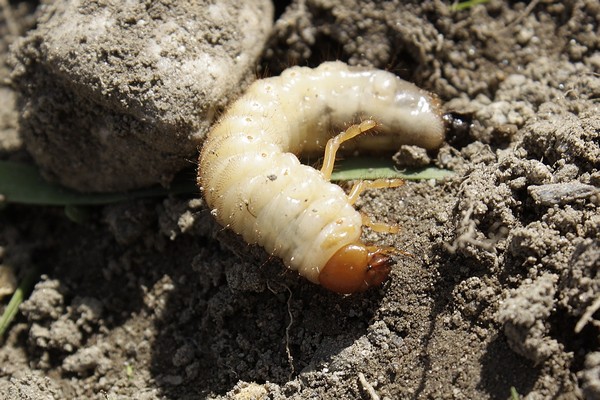 Larvaes transfrom to various kinds of termites, for example, workers: 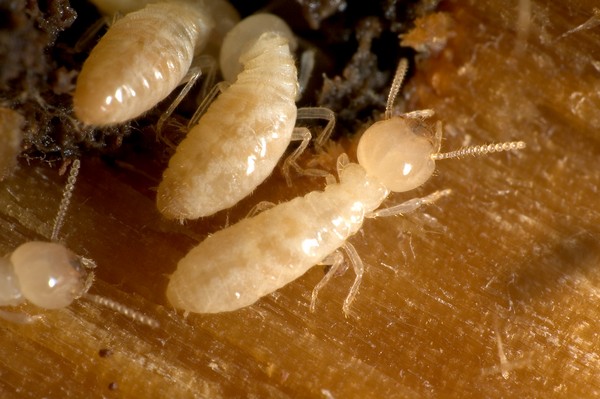 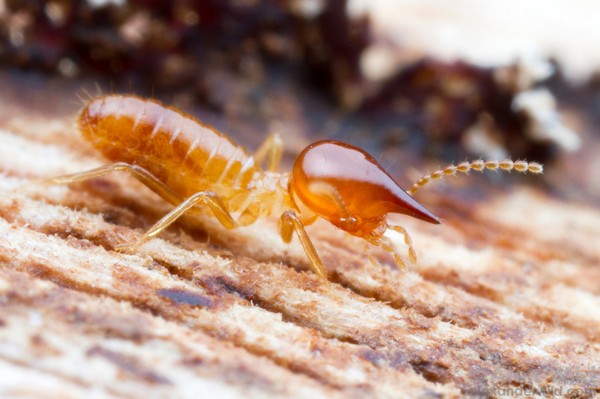 And winged termites who are ready to build a new nest:

It is a life cycle of a termite.

Workers have no wings and also have several evolution stages. The length of their body is from 2 to 15 millimeters long.

Not all termites have workers (dampwood termites, for example). Here workers’ functions are performed by pseudergates. Basically pseudergate is an elder nymph. Immature termite can act as a worker for quite a long time without changing its appearance. Under certain circumstances pseudergate can become a soldier or reproductive termite.

Termites’ workers (except for Termitidae) are not too different from nymphs. Unlike “lower caste” their skin is harder and has light pigments; they are more active and mobile as well. Workers grow slowly, step by step without any changes in wing pads. Shedding makes it possible to grow and develop further, though these processes not always find place. Sometimes shedding means that the number of development stages may varies.

Workers perform different functions: building and repairing of nest, collecting and keeping the food. Only workers are able to digest cellulose, that’s why they feed the whole colony.

The main termites’ enemies are ants. That’s why all termites have soldiers (except for Anoplotermes). They have no wings, are usually blind and have big head with mandibles (insect mouthpart). Soldiers’ aim is to protect the nest, but the way they are doing it is different (depending on termite type). For example, mandibles can be replaced with a kind of a cone on the head which contains poison (conehead termites).

Soldiers grow up from larvae, pseudergates, younger workers and even nymphs (after 2 sheddings). After the first shedding white soldier appears (pro-soldier); and after the second shedding it turns to a soldier. Usually the first soldier appears after a year, the second – after two years after nest foundation. Soldiers make 5-15% of all termites in the nest: everything depends on termites’ type and external conditions.

Notice! Workers and soldiers do not perform any reproductive functions. Moreover, they are sterile.

Scientists believe that termites’ divergence of male and female species appears very early: most probably at the stage of eggs. Moreover, the number of larvae’s stages is lower and the number of nymphs’ stages is higher. There is another opinion that soldiers appear from nymphs of specific genders (not in a random way); workers can grow from both male and female nymphs; and termites of different genders and growth stages are also different in size. 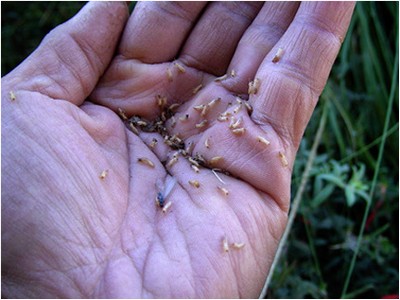 Usual termites’ swarmers have two pairs of wings which are almost the same in size. There are two types of swarmers: winged reproductive males (kings) and females (queens).

Comparing with other castes of termites, swarmers are bigger in size. Reproductives can be primary and secondary. Primary reproductives are those which perform king and queen functions in the nest (they can live up to 10 years and even more). Secondary swarmers are not mature enough for copulation process but they live to replace primaries if something happens.

Not all termites have secondary reproductives. Termitidae, for example has no species without (or almost without) wings which can be replaced by reproductives. Most probably they became extinct during evolution.

Termites’ mating period is ending with making a couple: they have their copulation after, in the nest. Their flying distance may be different: from one to hundreds of meters. Generally, male swarmer connects with his female partner; after that they land on the ground, shed their wings and start looking for a place for their nest.

Future queen and king need to dig a hole (it can be also called a channel). The major work is done by queen; male swarmer protects her from the others which couldn’t make a couple. After finishing channel they close it using soil; and start copulation inside. After a couple of days female swarmer lays eggs. The pair uses all internal reserves, as it can’t go out and start looking for a food.

While being “pregnant” queen’s body gets 10 times bigger (eggs take ¾ of her body), which makes her unable to move. If it is needed, large quantities of workers unite to move her. New winged termites will appear only after 2-3 years, when the nest becomes highly populated.

The king is just a little bit bigger than workers (8-10 times smaller than queen). His aim is copulation with queen during his whole life.

Swarmers stay underground or within wood all the time the nest exists. One colony can survive for ten years producing thousands of termites.

Some female swarmers do not fly though they have wings. They climb up the grass and try to attract male swarmer with their appearance and wings noise.

Some termites build their royal cell in the wood: as while eating it they can produce special secretion which their nymphs will eat.

All new reproductives (that appear in the nest) have wings; their goal is new colonies creation. When mating season comes, they fly out of the nest and start looking for a partner. New reproductives appear only when pseudergate number reaches 30-50, the queen and the king can rely on colony and stop feeding themselves. A couple of years after the colony can raise new swarmers. In tropical forests termites grow faster.

There are not too many facts on termites’ lifetime. This can be explained by failed attempts to mark termites: all marks are quickly scrubbed by congeners. If it is not possible to get rid of the mark, termite is being eaten. As it was said earlier, termite mother lifetime usually reaches 10 years and more.

Attention! In ideal conditions the colony can live up to 50 years.

After reaching the end of its lifetime the colony dies and termite nest ruins. Taking into account all the external factors and threats, it can be said that termites are excellent survivors.

Termites’ lifestyle run in a strict way and the existing hierarchy is never being broken. The king and the queen are at the highest level, and then soldiers and workers go. During nest lifetime many workers and soldiers die, but due to queen’s fertility the number of termites in the nest refills very quickly. A huge long living colony is the result of one pair of king and queen copulation.

If you find termites

Of course if you find termites’ attack, it would be better to call professional company which has an experience in pest control area.

You should realize that in order to have no problems with termites or their future appearance you have to get a professional advice. If you are sure that you can do it yourself, there are some methods on termite treatment.

Remember that instead of fighting termites tomorrow it is much better to do some preventive measures today.

Наверх
What do termite eggs sacs look like: why it is very dangerous if you found termite eggs in wood in the house?
Baby termites or termite larvaes: what do they look like and what are sizes of them? Why identification them in house is so important?
No comments
Thank you! Your comments will appear after review.
Add cooments
Cancel reply
New Posts