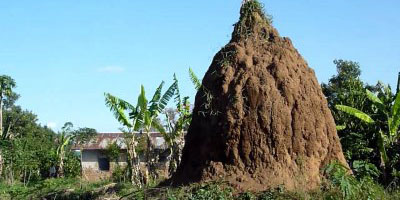 Most of the people who live in the northern hemisphere have seen termite moulds in films or cartoons.

Those are gargantuan towers of clay and soil, hanging over the surrounding savannah.

True it is that some termites do erect nests on the earth’s surface. 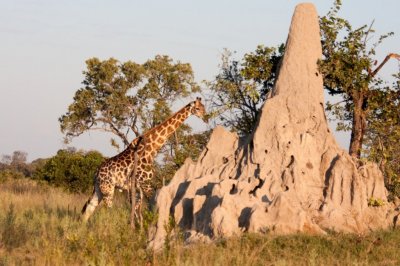 And the reason why for example US citizens have only seen moulds on a screen is because they don’t inhabit this part of the world.

So, where do termites nest? They live in:

However, in North America, Europe and Asia you may well face Subterranean, Drywood and Dampwood termites, who settle underground, in dry and damp wood, accordingly. Find out more about other species – eastern subterranean and formosan termites.

What is a termite nest?

A termite mound is a structure built on an underground termite nest that can reach astonishing 16.4 feet in height, 10 feet in diameter, and 12 tons in weight, serving as a home to one or even two million individuals.

It grows throughout many generations of its colony and turns from a small knob of earth into a huge column during many years.

How to find termite mounds in garden?

What is a termite mound structure?

A mound may have a conic, mushroom-like or elongated shape. 8-12 inches thick walls of the building are soaked in viscous secretion so that they were waterproof and resistant to flooding, though the walls may be perforated to let the air in.

Inside of it you can see myriads of sinuous tunnels, interconnecting numerous galleries. Those tunnels aren’t only intended for letting the inhabitants move from one place to another, but also for providing water supply, drainage and ventilation.

Even the underground termite nest, which can be meters deep in the ground, is connected to the rest of the mound with shafts. All this intricate system allows the inhabitants to easily moisten and cool the air down, because they, and especially their queen, are susceptible to air humidity.

6-12 inches below the surface there’s the nest, glued over with paper-like substance, there larvae grow. Beside of the nest there’re egg cells and the queen herself lies in her “room” under the nest, from where workers carry newborn larvae. 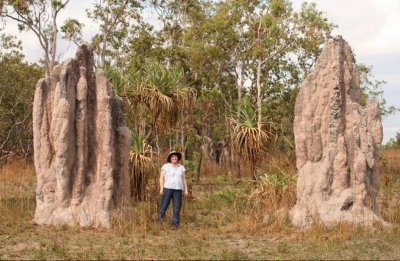 The queen is “trapped” there for life, so the workers enlarge the room progressively as she grows.

Under the queen’s chamber, there’re warehouses with forage – masticated wood and grass.

Upper parts of the cone are occupied with fungus farms, which are fed to larvae.

In order to get more food and water easily and safely, termites dig passes from the mound to the nearest sources of the supplies.

What does a termite mound look like? See pictures below: 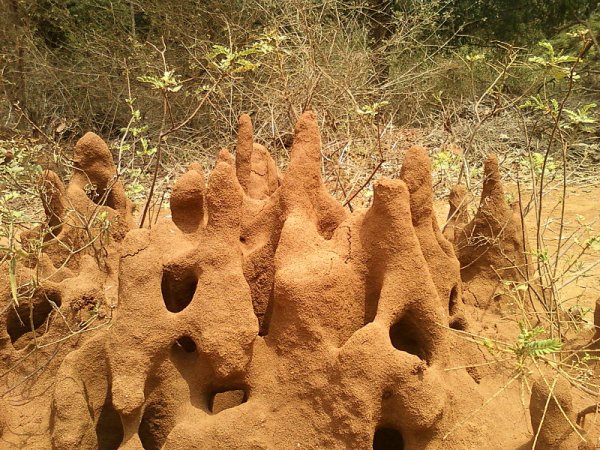 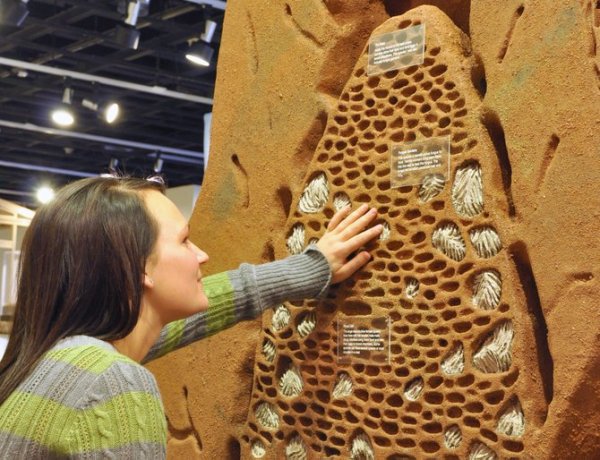 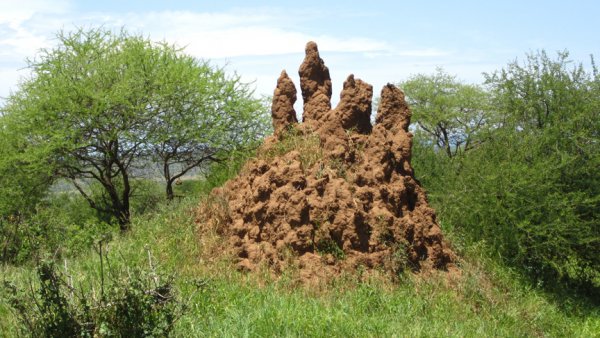 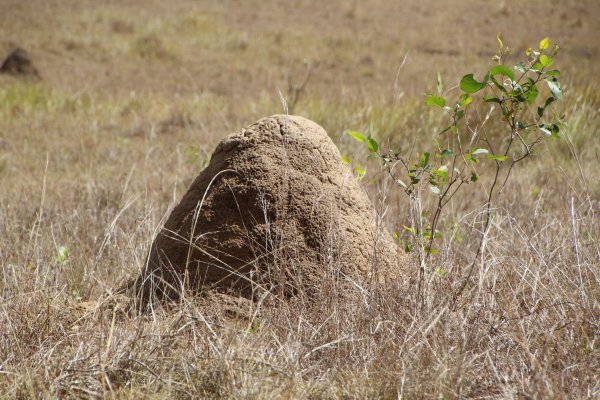 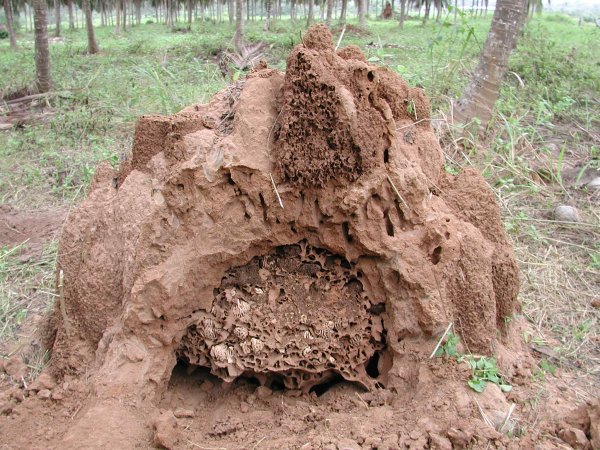 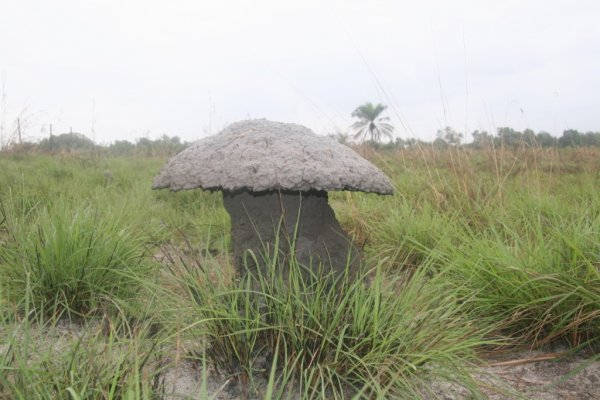 Now let’s move to another interesting topic which is termite mound ventilation system.

One of the most exciting things about termite constructions is how they are ventilated. Scientists used to think that when wind blows over a mound, that changes the pressure, and can lead to suction of CO2 from the interior.

Yet, recent researches have disproved this hypothesis. In reality, temperature oscillations because of day-night changes are used to drive air just like lungs do. During the day as sunlight warms the mound’s outer walls, the air inside warms, causing it to rise.

It cannot escape quickly, because the walls are quite solid, so it streams “downstairs” through the central chimney. At night, as the exterior cools, the airflow reverses, and it pulls the air up from the central part of the mound.

The result is that while CO2 concentrations during the day can reach up to 4 or 5 percent in the center of the mound, airflow at night pulls the gas to the exterior walls, where it can escape by diffusing through the walls.

In sum, these are the functions a termite mound carries out:

How they build them? 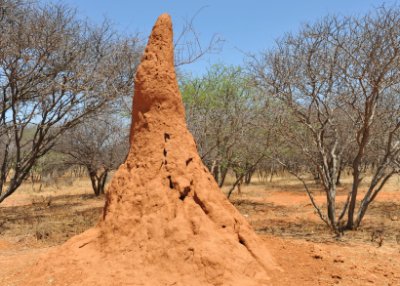 Although, since the mould is not a tree, it doesn’t “grow” exactly, it’s elaborately built of sand, clay, wooden chips and saliva by millions of termite workers.

It can take a century to build a really big one.

At that, they have none of chief architects, master plans or blueprints; every individual is preprogrammed to fulfill its obligations so that their labor resulted in a mound.

This is how they do it:

Other castes beside workers don’t take part in building. Soldiers and swarmers simply don’t fit for this purpose (soldiers can’t even feed themselves). As for locations, termites tend to start building in well-drained areas.

How to destroy a mound?

Since termite mounds are quite sturdy, it may be not that easy to break them down. Hit them with a hoe, a shovel or a pick. Some specialists also recommend dispersing the clayed dirt with a rototiller or another mechanism. 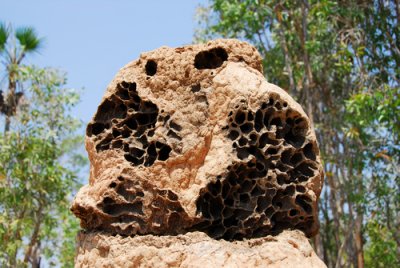 The most reckless termite exterminators even use explosives in attempt to eliminate the vermin!

However, you should keep in mind that even if you demolish the overground termite mound construction, the queen and part of the collective will remain underground, and they’ll rapidly restore what you’ve made disappear.

Sometimes it only takes for them days to build a new one if the queen and a significant part of the collective are intact! Of course, it would be hard for them to rebuild a century old mound as high as two grown-up men so quickly, but still.

So, you’ll have to use either insecticide or baited traps to get rid of termites, their queens and their popping up mounds once and for all.

Video showing inside a termite mound:

All in all, if you don’t live in Australia, Africa or South America, mound-building termites are not a threat to you and your house. However, if you still do, you should not only destroy the visible part of the “iceberg”, but also eradicate what lies beneath.

Наверх
How to Find Mounds of Termites in Garden, Walls or Ceiling? What Does a Termite Nest and Mound Look Like?
Termite Nests and Mounds: How Do They Do It? What are They Made of?
No comments
Thank you! Your comments will appear after review.
Add cooments
Cancel reply
New Posts