Behavior of Worker Termites, Their Role In Colony and Appearance 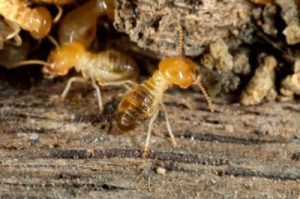 Not only people have organized societies with certain social roles. Some insects have such complicated systems that are really exciting. Termites can boast an ideal system of ruling the colony.

Termites have monarchs, the queen and the king, protecting soldiers, young reproductives and of course workers, which cope with a number of various jobs around the nest.

Their castes really remind the cast system of India. That’s awesome that such small insects have created a complicated system, in which every caste completes their own task to reach the goal together.

We are going to speak about workers, their appearance, peculiarities and special jobs they are usually doing in the nest.

The roles of workers in the colony

The termites colonies consist of several castes. The workers is the most important of them all, other termites won’t be able to survive without workers.

In the very start of a new colony, when a couple of alates settle down and start laying eggs, the first brood is always workers.

Different termite species have 2 or 3 workers size versions. They are: major workers (largest and darker insects) and minor, smaller ones.

Usually termite colonies contain from 60,000 to 5 million workers, which cover an area of 25,000 ft2, with a foraging distance of 230 feet. That’s an impressive number! 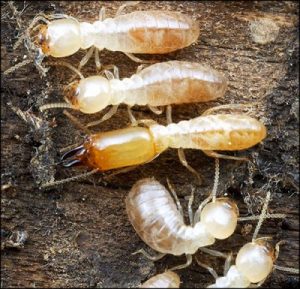 Worker termites have a number of jobs and responsibilities to do in the colony. Firstly, they look for food around and collect it. Then, they build and maintain nests and mud tubes.

The main food of workers is cellulose, the main component of wood and grass. When termites live in nature, workers are great helpers in breakdown of dead and decaying materials.

But if termites start eating wood in your house, that will cause a number of serious problems. If termites damage your furniture, that’s workers, other castes don’t damage wood.

Workers are also responsible for feeding the king and the queen, care about her and the eggs. They carry out the eggs to special rooms, nurseries. When the queen lays eggs, she becomes really big and not able to move. Workers move the queen when it is needed.

Workers maintain the pheromones around their colony as well.

Pheromones help the queen to rule in her small kingdom. During various jobs, like feeding or moving the queen, workers lick her and get motivated with the special juice.

This pheromone effect also stops workers from being unhappy with their tasks , jealous with their queen and so on.

That’s interesting that termite workers do different tasks depending on their age. For example, old workers are responsible for cleaning the royal cell and the maintenance of the queen.

Workers don’t live for a long time, just one to two years. Their life is much shorter than the queen’s. Usually termite queens live from 20 to 50 years. So, during her life, the monarch has a great number of workers, which change every year or two.

Here you can watch the video about worker termites behavior:

Workers do not usually attack the enemies, but they are able to defend themselves. If the nest is attacked heavily, they help the soldiers.

Workers’ jaws, which are good for chewing plants, great for defense as well. What workers usually do during attacks is biting ants with jaws and not letting enter the nest.

Larger workers usually perform heavier tasks while smaller, more delicate ones, are caring for the brood and feeding other members of society.

Workers are not normally reproductive, but have the ability to develop into soldiers or reproductives if their colony is in big distress and needs more termites in these castes.

All the termite castes look differently. Workers can be distinguished from other colony members by size and color. Workers are usually white or pale, they have rounded heads and bodies as well as straight antennae. Workers are much smaller than their rulers, the queen and the king.

Firstly you can have difficulties distinguishing soldiers and workers. Soldiers, the colony’s defenders, can also be white or pale, but they possess larger jaws and dark heads. If you notice termites with wings in your house, they are young swarming insects.

They are also reproductive, as well as queens and kings, but start laying eggs only after settling up and shedding the wings.

Worker termites are blind. Sometimes people are really interested if the queen doesn’t look grotesque for workers because of her form and size. But the workers can’t see their queen!

Workers have special bacteria in their gullet, which assists the termites in digesting the cellulose.

This bacterium is actually the main reason why some termites are destructive pests while other ones are not.Workers prefer to feed on fungus-infested wood, but can feed on undamaged wood as well. Workers secrete food material from their mouths and anuses for feeding the reproductive termites and soldiers.

Termite workers need really humid conditions for survival. They carry mud to wood areas where
humidity can rise up to 97%. Termites are able to move their colonies in the soil up and down depending on optimal temperature and moisture conditions.

On these pictures you can see how worker termites look like. 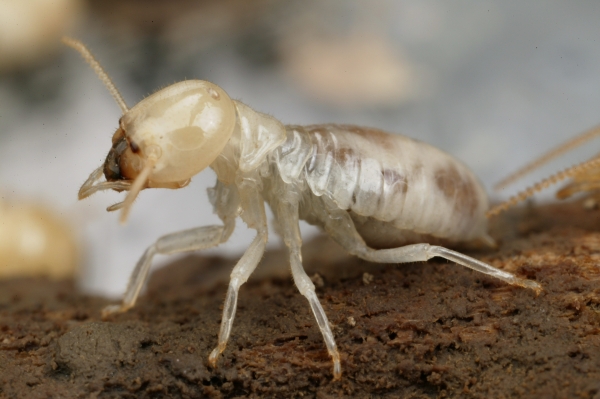 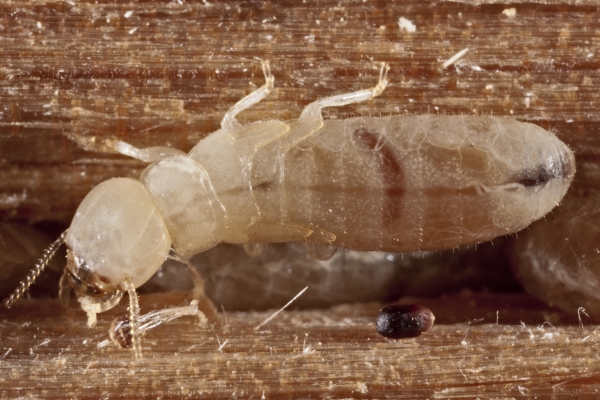 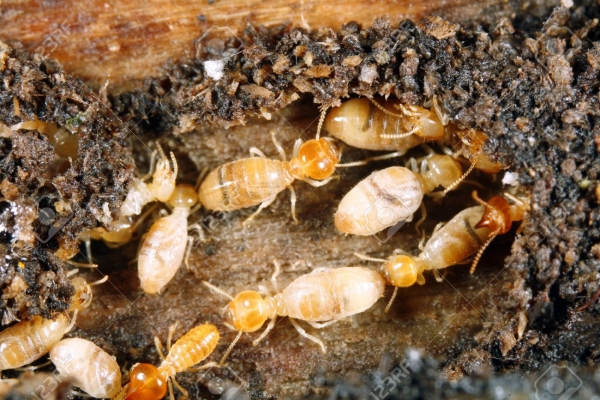 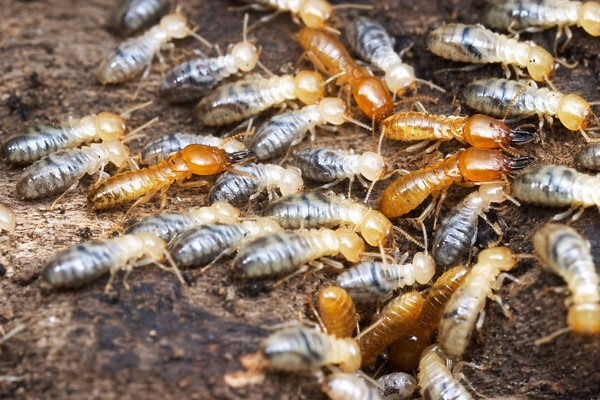 Here are some facts about worker termites and other colony members which can be really interesting for you:

Worker termites can travel a lot in search for food, they may make the distance about 250 feet from their colony

How can termites damage the house? 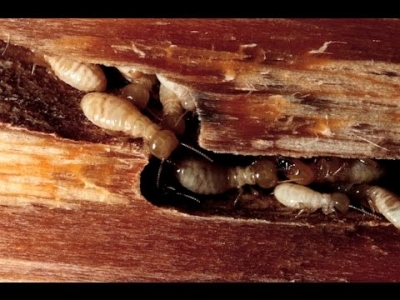 Workers search for food outside their nest. The main interest for them is wood and cellulose. In the house they can eat such wooden structures as flooring, siding, joists, beams and so on.

But that’s not all. Carpets, clothing and wallpaper also contain cellulose and can be damaged by small hungry creatures.

Houses are mainly damaged by subterranean termites. You should be really careful it you see following signs, they are the first symptoms of termite infestation:

Hard-working workers feed and care about other termites and the nest. Now you’ve learned basic information about them. Knowing about termites’ life and behavior you can easily cope with them.

Of course, calling for a specialist is the best way out. Anyway, you can try to defeat the enemy yourself.

Though workers do a great number of jobs in the nest, you should kill the queen, only then the termite activity will stop.

You can read more about finding and killing the queen in the article about this termite ruler. And you should be really careful, because termites are wise. When they notice the danger, soldiers will start attacking you and workers – saving the queen.