The termites in your house can bring a lot of destruction to your property.

In US only, the house owners spend around billion dollars each year on the preventive measures or treatments for termite infestations.

This insect owns the earth, being found building its nests all around the world with the only exclusion of Antarctic.

In the jungle or in a rain forest of South America it can be an environmental helper for utilization of the dead wood. But in the cities it’s just a massive inconvenience, as long as we use woods to build our houses or other structures.

And termites’ primary diet ingredient is cellulose in any form; they are known to be able to chew through wood, carton, cotton fibers and so on. To fight this small and silent enemy you have to be able to identify its presence in your house or in the soil surrounding it. 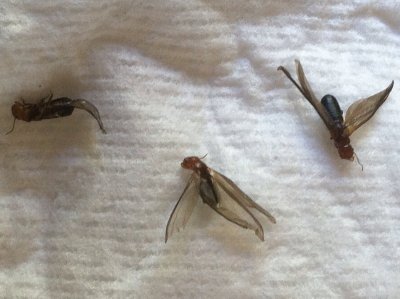 Do termites have wings? Yes, but not all of them.

There plenty of species of termites that can infiltrate your household, but there are only three major families:

Learn more about the differences between drywood and subterranean termites.

The drywood termites prefer as the name states dry wood so they are a danger for all the structural elements of your household including timbers, floors, furniture.

The colonies of drywood family can be rather small (starting from just a 50-100 individuals) and they live without need of direct contact with the soil. The infestations by these species can be easily contained sometimes just by getting rid of the infested wooden element.

The Subterranean termite is the greatest threat to wooden structures in USA. As it doesn’t build the nests above the ground it thrives in the soil itself.

So even if you got rid of all the possible signs of the infestation inside the building you cannot guarantee that the termites will not reenter the house if you do not use the soil treatment methods or other ways to make sure the nest is cut off or completely destroyed.

The most famous member of the subterranean family is a Formosan termite, the species that is not native to US, and that is nicknamed “super termite” for the size of its colonies that can reach up to several millions of individuals.

Important! Prevention is always better than the treatment. Make contract with the pest control managers straight away and you will not need to pay the inspection each time you feel suspicious.

To start the treatment against the termites you need to determine what kind of termite you are going to fight, especially if you want to use DIY methods, because the reasonable solution can be quite different for the drywood or subterranean termite.

For identification of the species you need to find some individual termites. As you might already know, in the colony of the termites there are three casts:

The workers of all the species are very similar, so they are not suitable to determine the specific species.

Soldiers can be used for their identification, but the best ones for this purpose are the winged reproductives, the alates that form the swarms.

If you can get one of them, you can bring them for the identification in your local pest control office.

Sometimes even the shed wings themselves can be used for identification purpose. To sum up, why do termites swarm? They swarm in oder to create a new colony.

What are the alates?

The alates of the termites are the reproductive cast that exists with the only purpose to start a new colony when the time comes. This cast appears only in a fully developed colony, so in some cases after 3-5 years since the nest was established.

After hatching from the egg, the larvae fall under the influence of the king and queen’s pheromones that will determine its future. Through several moults the larvae will reach the adult form of worker or a soldier, or it will become a nymph.

Only the nymph can continue to moult until they become the winged termite swarmers. The nymphs are being fed by the workers until their adulthood, and all this time they are kept in a nursery in the core of the nest, so there’s little chance those would be the first termites you’ll find in your household.

Once reaching the adult form, the alates are ready to get out of the nest. Thousands of them emerge from the ground or out of the infested wood at once, forming a swarm. That’s one good moment to realize that you have a termite problem.

If your grandmother’s armchair is suddenly covered in winged insect one Sunday morning – you bet you have some drywood termite infestation, if the swarm arises from under the porch from the soil – then subterranean termite it is.

Do termites fly? The winged termites are really poor flyers, so the distance of their flight is rather short, unless they get caught in the wind. Normally, they land not too far away from the starting point and immediately shed their wings, because they will never use them again.

That’s the time for the young reproductive to meet its couple. And when the two alates got together they become the new king and queen of the freshly established colony. 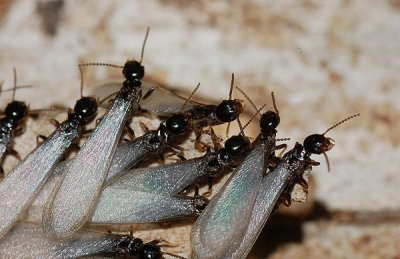 Good thing – hardly any winged termites get to this point.

Normally most of the swarms up in the air is vain, the reproductives are actively hunted by the birds, reptiles and another insect.

Others just get blown away too far and cannot find a pair.

One way or another only the luckiest ones reach the goal of establishing the new colony. That’s why the termite swarm is so incredible in numbers; the more insects in the air the better the chances are at least some of them will carry on with reproduction task.

The new colony doesn’t grow fast. The king and queen are taking care of the first eggs and hatching larvae themselves so, it’s normally only couple of dozens of them. Then, when the first workers are fully grown after 2-4 weeks, the royal couple can devote itself fully to reproducing task.

Until the death of one of them, these two termites will be the only ones in the colony to lay eggs. And as been said, the colony will reach its full development only in 3-5 years, when it will be ready to produce its own alates.

Find out what does swarmers of different species look like: drywood, subterranean, formosan.

What does termites with wings look like? See pictures below: 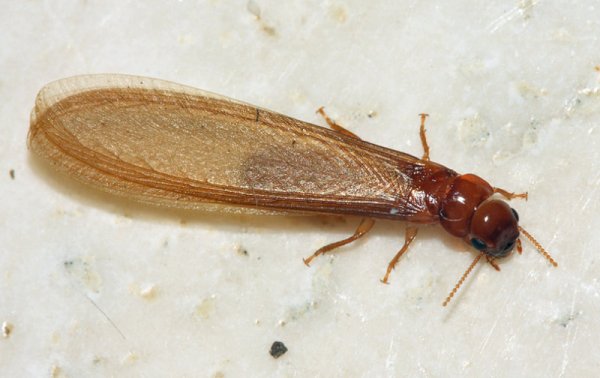 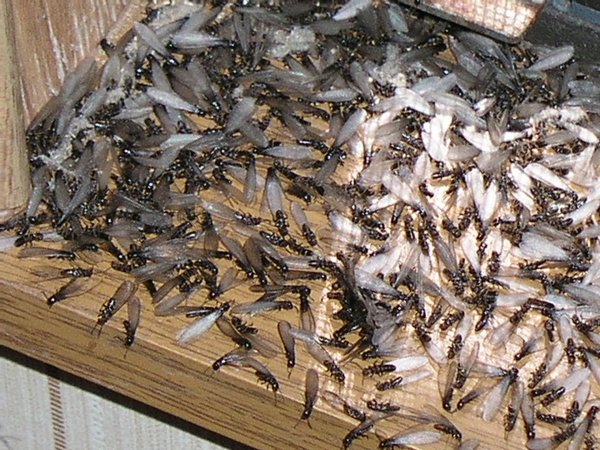 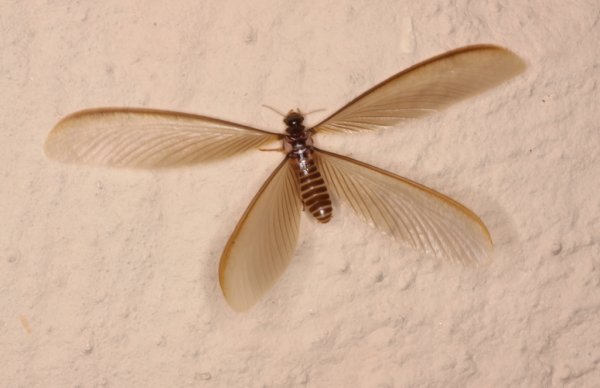 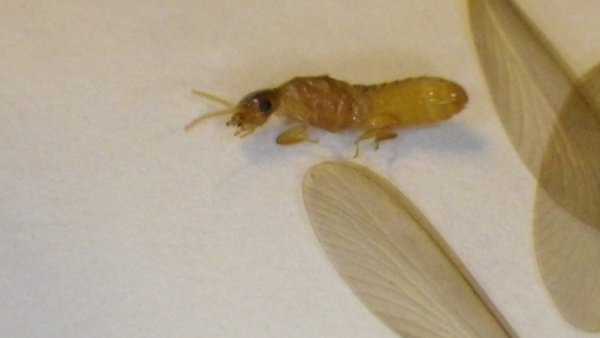 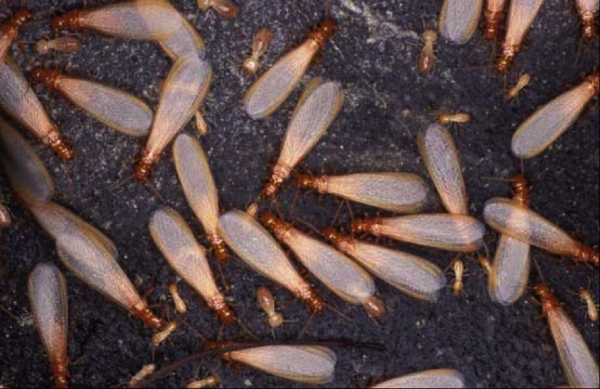 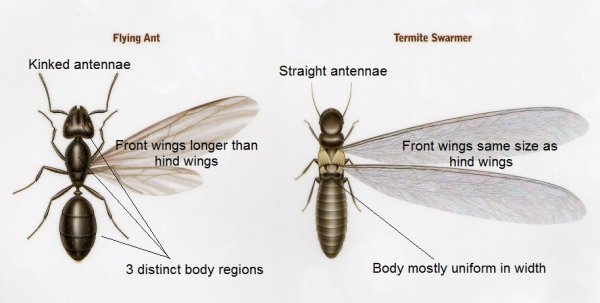 So, let’s say you noticed a swarm of winged creatures not far away from your house. Should you panic immediately or it can be rather harmless to your property? Well, the only way it can be not placing any danger over your household is if it’s the swarm of winged ants.

In this case you need to be able to tell the difference.

To tell a termite from ant is quite easy and usually doesn’t require any magnifying equipment or special knowledge. Basically you can mistake one for another only from far away, when you just look at the swarm as a whole.

But once you got an individual insect the difference is obvious:

What to do if it’s a termite? 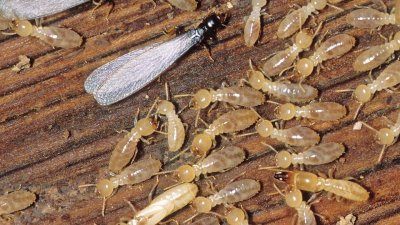 Well it would be useful to determine the species.

This task is not as easy as telling an ant from a termite.

You will need a good magnifying glass and some proper entomology knowledge, so maybe easier to collect the samples and let the specialists have a look at them.

But if you are determined to try to identify your termite yourself, then here some tips for you:

Find out when the swarming season starts and what to do if there are flying termites in the house?

If you’d like a simple answer – no. Do flying termites bite? The termite alates do not bite people or pets; they do not destroy wood themselves. But their presence is a dangerous sign. As they are not good at flying, finding the winged termites or even only their wings might mean that the colony is nearby, and it’s a fully-developed mature colony of a big size.

If you see a swarm just in a close proximity to your house, check if it comes from the ground or a log. If it’s just a piece of tree – it might be that your house is not infested yet, but the prevention measures should be taken not to get the drywood termites infestation.

If the swarm emerges from under the ground, you might be in trouble. The colonies of the subterranean species can be vast and huge in numbers. The good idea is to start some soil treatment right away.

Do not ignore even if you find some shed wings around the house. Flying termites attracted to light, so the most usual place to find their wings are the window and door sills.

In case of Formosan termites, they are always attracted to the source of water, so their wings can be found under the sink or in the bathroom area.

More information about signs of infestation you will find in the following articles: early signs, what are the evidences of termite activity outside and in the house – in walls or furniture. What are droppings and do termites make noises?

How to get rid of the winged termites? 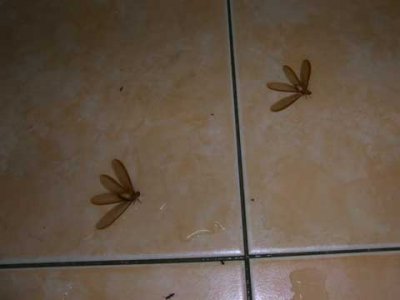 With the reproductives themselves all is quite simple – just a bit of a bug spray will do.

But as we said that the appearance of them around your house can be a sign of a full-grown infestation going on.

So get in touch with our local reputable pest control specialist and start the treatment right away.

If you suspect that the termites you have are only small drywood colony you can try the DIY methods, but only if you’re entirely sure, in any other case it is strongly recommended to put out the chemical barriers, baits or do the full-house fumigation, and all that has to be done by professionals.

Where do flying termites come from? from underground, this process you can see in the video below: 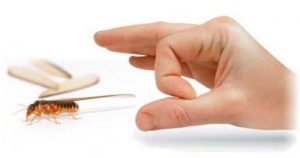 Most effective treatments for winged pests or how to get rid of flying termites? 0 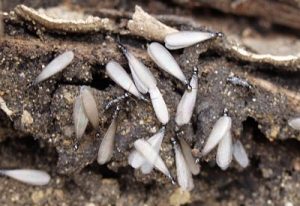 Features of swarming season or when do termites swarm? 1 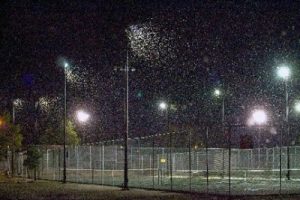 Treatment methods of swarming termites or how to deal with flying termites in house? 0
Nuances of identification winged pests or what do flying termites look like?
No comments
Thank you! Your comments will appear after review.
Add cooments
Cancel reply
New Posts