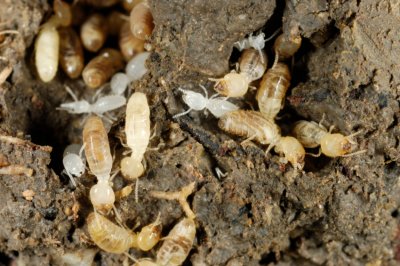 Floods, fires, tornados are a big threat to houses in US.

But there is a much smaller cause which brings the greatest damage to homes as well as the economy.

While hard to notice at first, once infesting the building the termites start destroying it from the inside and it can take years to recognize the real problem.

Coptotermes formosanus or Formosan termites belong to the genus Coptotermes which contains more than 3100 termite species altogether. But Formosan is the most economically malicious and geographically spread species which can be rather dangerous to any cellulose structure. 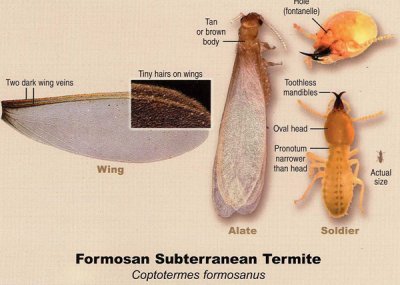 They can create a serious problem in your household and have to be identified as soon as possible to free your house from these mischievous pests.

Formosan termites, most probably, originating from South China and from there, over the hundreds of years were spread to Japan, Taiwan (where the name comes from) and Hawaii.

In the last century they were transported to South Africa and United States.

Nowadays the US states suffering the most from the invasion of Formosan termites are Alabama, Florida, Hawaii, Mississippi, Louisiana and Georgia.

Warning! If you don’t see any dead or living termites in your property it doesn’t mean that your house is not infested! Check for signs of infestation outside and in the house: in walls, furniture. Also learn more: how do termite droppings look like and what kind of sound they produce?

This termite is a subterranean species which builds long and wide spread interconnected foraging galleries in soil.

A single colony can be consisting of millions of termites, comparing to only hundreds of thousands of individuals in native American termite colony. She sheer amount of individuals and range of their foraging (up to 100 meters in the soil) makes it impossible to eradicate them completely from the area.

One colony can consume up to 400g of wood per day and can seriously damage a building in 3 months. All this gives Formosan termite a glorious nick name of the “super-termite” in US.

The colony of the Formosan termites, as the one of any termite species has three casts:

The reproductive cast include: 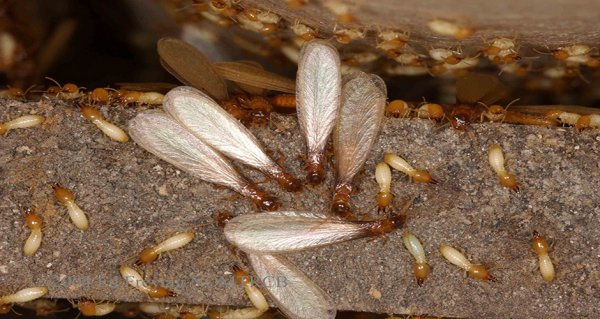 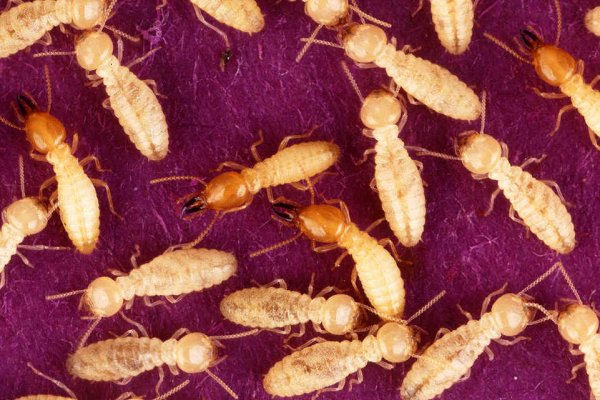 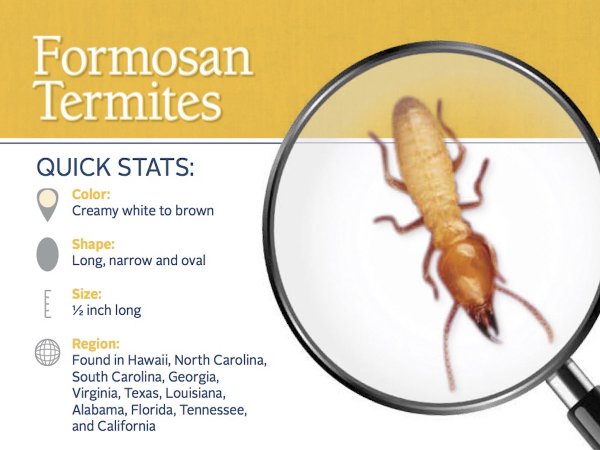 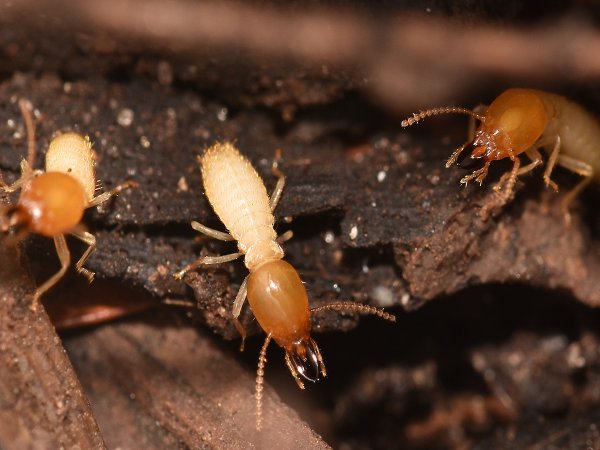 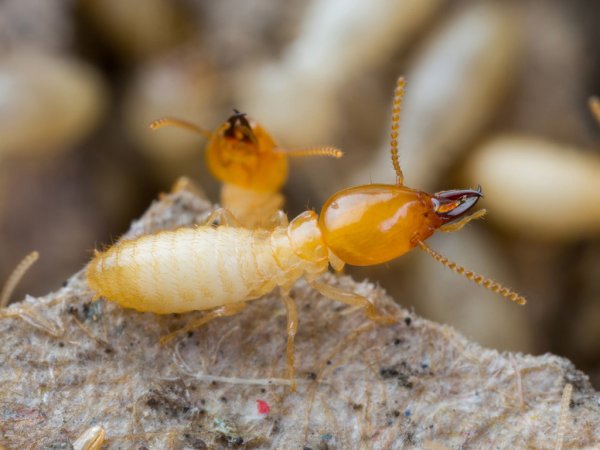 The vast majority of individuals in the nest are workers, who are also the main collectors of food and materials and are the main danger for the structures in the foraging range of the colony.

They look very similar to workers of many other termite groups and for this reason cannot be used for clear identification. For accurate identification the pest managers are using alates or soldiers.

The lifespan of the workers and the soldiers is 3-5 years, and there are approximately nine workers per one soldier ratio in the colony.

Workers are the main foragers in the colony, collecting cellulose and feeding digested substance to the other members of the colony. They also cementing the wood and soil with their saliva and feces to build the nests. 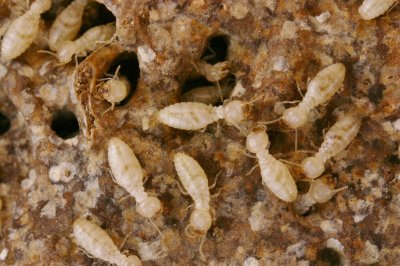 The soldiers have cream-white color bodies and darker brownish head with curved mandibles (the jaws).

They have a big opening on the top of their heads (fontanel) which is used to shoot the defensive secretion in form of gooey fluid if attacked.

The colony of Formosan subterranean termites has unusually large percentage of soldiers in their colonies – 10-15%, comparing to 1-2% of the native species.

Alates are yellowish-brown color and 12-15mm long, which makes them relatively large. They have small hair on their wings which allows to distinguish them from native species.

The swarm is enormous in numbers and takes place at dusk, when the weather is warm and humid. In South-East states they usually occur from April to July. Winged termites are attracted to light and can be easily found next to artificial light sources.

A single colony may produce around 70 000 alates. Their main purpose is to establish a new colony, so after a short flight swarmers lose their wings and search for nesting place where the females lay approximately 15-30 eggs.

The young termites emerge in 2-4 weeks and couple of month later the queen lays next batch of eggs. Only after 3-5 year period the colony will be mature enough to produce new swarmers. The queen herself may live up to 15 years and lay more than 200 eggs per day.

Learn more about flying termites: how do they look like, when swarming season starts, what to do if they swarms in your house?

As for this, all the other species of termites in the world, the primary element to Formosan termite diet is cellulose. This include wood, paper, cardboard. 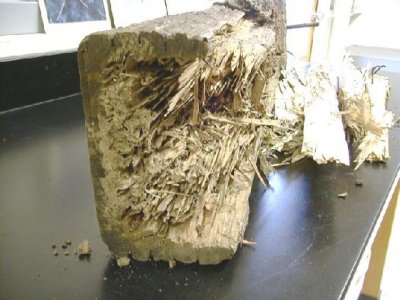 But the super-termite is also known for its amazing ability to nibble through almost anything – from lead to plaster, from plastics to asphalt.

That’s why there a high amount of power cuts, caused by these insects – they manage to chew through the electrical cables.

They also can attack a living tree and the studies have shown that the colonies consuming mostly pecan, carya or red gum were producing much more offspring.

And the progeny survival rate is also significantly higher for the colonies feeding on American ash or pecan trees.

A single termite of the Formosan species is not consuming more cellulose than the individual of any other termite family. The main problem and explanation for the great damage they cause is the number of individuals in the colony.

Being subterranean, the Formosan termite is usually attacking the wooden structures which are in direct contact to the ground and have the entry points such as cracks, expansion joints or utility conduits.

But the soil is not the only place the termite can build the nest. If the couple of swarmers landed on a suitable spot above the earth they form an aerial colony. For establishing the new nest, the alates need two conditions: enough food and moisture.

For this, one of the best places to host aerial colony is a flat roof of the modern building, where the rain water is always easy to get. So there’s no surprise that up 20% of termite infestations are occurring because of aerial colonies in urban districts. As it can be clearly seen formosan termite damage could become a serious problem for any house.

Here you can learn more information about how to find nests and treatment and prevention methods.

Do formosan termites bite? Though the formosan termite soldiers are well-equipped to protect the nest from the invaders, normally the only ones getting attacked are the individuals of the rival colony. So the chance that a human or a pet is getting bitten by termite is very small.

Termite Can bite you if forced to, for example when you step on it. In this case there’s always a chance you will not even feel anything or feel a slight pinch, if the skin in a bitten place is thin.

And you don’t have to worry about any special treatment for it – even if there is a slight irritation it will pass by itself and leave no trace. There’s no virus or infection transferred by termites. More information here.

How to recognize if the house was infested with termites? There are plenty of signs:

Warning! If you suspect the termite infestation in your house – contact local exterminators as soon as possible, don’t wait too long – they won’t disappear by themselves. 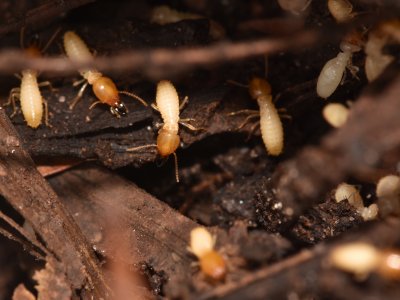 The first sign that the area is infested by termites is the presence of winged swarmers.

As they are attracted to light it’s quite easy to notice them at the time near windows, doors, lights and vents.

The workers are harder to notice as they are considerably smaller, but they also might be present in the house.

Also pay attention if you see any wings or dead termites in the places such as vents, sinks, windows or tubs – possibly you skipped the actual swarming time, but you can always detect traces of it.

If you know something about termites already, you might have heard about frass, which is basically the excrements of the termites. They resemble the sawdust a lot and usually are mistaken for it.

If you found some of it around your household – your house is infested with drywood termite species. The analog for the subterranean termites are the mud tubes.

The mud tubes are essential for the termites as they don’t like to be exposed and are in need of sheltered ways to travel between their nest and provision sources.

They often appear along the cracks, under the floor, around baseboards, on pipes, chimneys, plumbing and other fixtures. They are the width of the drinking straw and slightly flattened.

To recognize the wood which had been attacked by termites is enough just to tap on it. In serious cases the insects may leave only paper thin surface surrounding hollow insides. On The outside this wooden piece may look peeled or blistered. 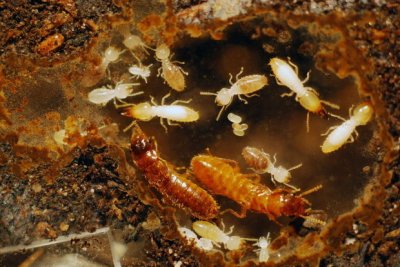 Also the infestation can be recognized by the formosan termite carton nests, which can be discovered in the hidden places in the house, especially between the walls.

The nest material is made of processed wood, excrements and soil.

To check for nests you need to probe the suspicious areas with an awl or the back of the screwdriver and see if the wood seems soft or hollow.

Also check the cracks in plaster and knots in trees.

Learn how to Get Rid Of Termites and kill them yourself with our best DIY ways:

Once you found any of those signs of formosan termites get your house inspected by pest control professionals. But even before that it’s a good idea to have your property annually checked, though in the early stage of infestation is hard to tell if your property is in danger.

If you sure that your home is infested but you’d like to treat it yourself – you can, but it will be difficult. You will need some specific equipment such as drills, monitoring devices and others. So you should weigh all pro and cons before entering a hard fight with a colony of termites all by yourself.