Baby termites or termite larvaes: what do they look like and what are sizes of them? Why identification them in house is so important? 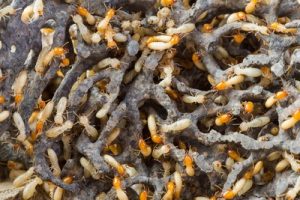 Termites are arguably the biggest threat to the household owners in US. Each Year the homeowners spend billion dollars on the prevention, control and repairs for the damage caused by termites.

Nicknamed “silent destroyers” these insects are almost unnoticeable in the early stages of the infestation and when you have noticed them, well it might be too late for saving the wooden structure.

There are several types of termites, living in US: 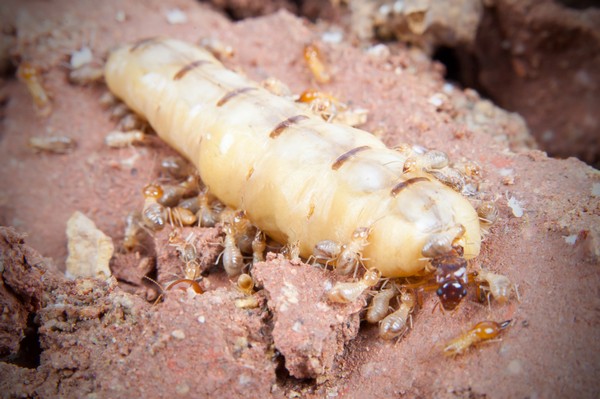 The first group, which is called subterranean termites, includes native species and Formosan termites that were brought to the country in the middle of twentieth century from Asia and since then won a nickname “super termites” for their destructiveness.

The second group includes drywood and dampwood species that do not need any contact with soil, so they are a bit easier to get rid of, but it still can be not an easy task.

Important! Start treating your house for termites even if you noticed as little as shed wings on the windowsill. Don’t wait for the damage to be done!

You might have heard termites been called white ants, which biologically doesn’t make any sense as they are completely different insects. The termites are actually the descendants of the wood-eating cockroaches that lived in Jurassic period. So all the similarities between the two families (the social structure, for example) can be explained by convergent evolution.

The termite family is an extremely successful group of insect. The lands colonized by them are vast, with the only exception of Antarctica. As the main component of their diet is cellulose, therefore they consume wood, leaf, soil, animal dung that can be found in plenty of places around the world.

Termites are social insects, they live in bigger or smaller colonies, (from hundreds to several million individuals) that have different casts of insects, each having its own duty and having its own purpose. The cast system of termite colony includes: 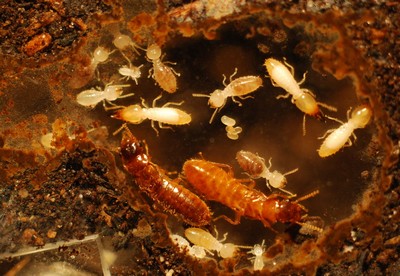 Each individual termite is going through the incomplete metamorphosis during its lifespan. That means that it goes through the stages of egg, larvae or nymph and imago (adulthood) skipping the pupal stage. It takes usually few weeks for the termite egg to hatch.

After the larvae hatches from the egg, it must go through several moults until it will be adult. So to simplify: there is no egg which contains a soldier or worker specifically.

The insect hatching out of the egg is a larva of a termite, then they moult to become the baby termite that looks a lot like a worker, and by further moulting they can become a soldier, an adult worker or a nymph which through the further molting can grow to be a reproductive.

The direction the development of the larvae will take is determined by the king and queen pheromones, which direct the immatures to their future role in the colony.

In some species of termites, the nymphs which are already on their way to moult into the winged reproductives can regress and become a “false worker” if the colony is in need of workforce. These ones will be correctly called pseudergate workers and exist in many colonies of the Drywood termite species.

The time the larvae will need to fully transform into the adult can take several months. All this time they are being fed by the workers of the colony and the length of their “growing up” period will depend greatly from the food availability, temperatures and the population of the colony. The workers also have to forage for the entire colony, so the more mouths are there to feed the less time they have to feed the nymphs and other larvae.

The young termite can be mistaken for the psoids or booklice; they have the same whitish transparent color, have soft bodies and are really small. At this point they resemble to a worker termite, just being smaller in size. It might be as little as 1/10 of an inch long. The nymph will be a little bit bigger than the larvae but otherwise will share the same characteristics.

Important! If you’re not sure what you’re looking at: winged ant or reproductive termite, larvae or a maggot, collect the insects and bring them to your local pest service for identification.

The process of moulting precedes the termite growth. Under the exoskeleton of a termite forms another soft one. When the larvae grow in size the current shell cracks open and gives way to the new outermost exoskeleton, that enlargers and hardens. 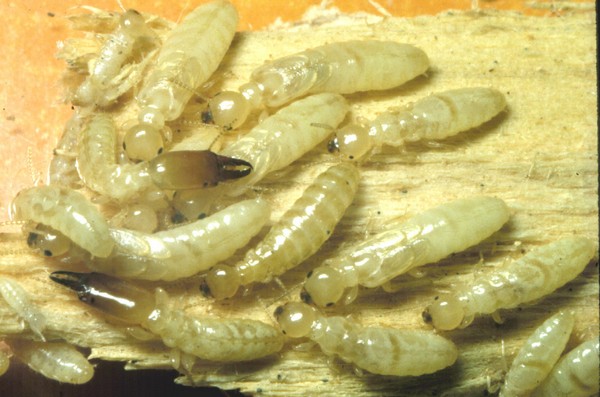 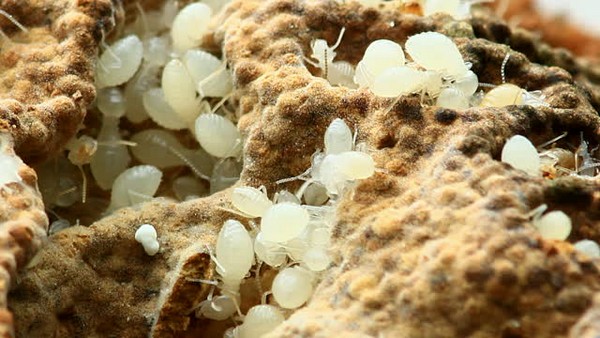 The young larvae are small and unprotected, so they usually hide inside the nest in a special nursery. So, normally they will not be the ones that give away the infestation of the house. How to do identification termite larvae in your house? There are other signs which can signal that the infestation of your house has already happened:

Once you detected that your house is infested with some kind of termites you have to act fast, some subterranean species can make a serious damage to your property in as little time as three months. So act immediately.

There are some methods to exterminate the termites in your house that you can use yourself, the others will need a professional help from pest control specialist. Some of the possible solutions are:

Fumigation. This termite treatment must be executed by the licensed professionals. The idea is – you cover all your building with the special enormous tent and fill it with a gas that kills all the insects in the covered area.

The minus is that the only that will die are the termites that are inside the house, so it will not kill the subterranean queen or larvae and will not prevent the termites making their comeback. But tenting will be very efficient against drywood species.

Chemical repellent treatment. This way you can create a barrier around your house that termites cannot cross. This way you are sure that if you house is clean – there’ll be no repeated infestation.

Chemical non-repellent treatment. This is basically poisoning the food of termites by applying chemicals to the wooden areas in the house. Big bonus – the poison will be passed from the workers to the rest of population of the colony, including the larvae, effectively exterminating the nest itself. This way is also called simply baiting.

Natural oils. There are plenty of natural and safe oils for people and pets that can protect the wood from termites. This includes clove bud, vetiver, orange and neem oils.

Extermination of the larvae

The larvae stage in termites’ development gives us humans who want to get rid of the colony within our living space another possibility for their extermination. That will be the method that includes the use of the beneficial nematodes. The microscopic nematodes are small worm species that feed on their hosts, in our case termite larvae, killing it in 48 hours.

You can spray the nematodes into the infested rooms or onto the soil around the house – the worms will find the host to feed on themselves. This solution can do very good for the subterranean termite infestation, when the main nest is situated somewhere underground and is not easy to detect.

At the end please see the interesting and useful video about identification of termites:

As we said earlier it’s hard to detect the infestation by searching for the traces of larvae or nymphs. But if you use treatment that targets them, then you may have a way to get rid of even the biggest colonies.

But of course there’s no better way of pest control than the prevention of the infestation.

We recommend you do make a contract with a reputable service that will take care of the pest problem for you and will examine your house regularly for the signs of termite damage. This way all the DIY instructions will not be needed and you’ll be well protected from these mischievous little insects.