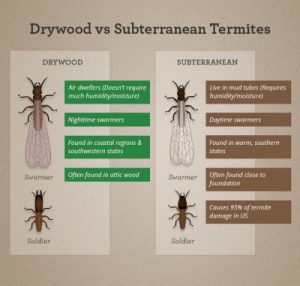 These insects similar in appearance to ants in the human understanding are considered terrible disaster.

From their actions big trees, wooden buildings and other objects are being seriously destroyed before they are discovered.

Questions about what are the natural area termites live in, what it is, what is their mode of existence is the subject of entomologists’ research.

All these themes are described in many documentaries and featured in scientific programs.

Termites live in huge multi-million groups called colonies that make them almost unattainable. That’s why special services are formed to fight with them. And they are poisoned with the strongest chemicals.

Attention: these chemicals may be dangerous for human beings. But unfortunately, even professionals are sometimes powerless to stop them.

In this article we will compare subterranean termites vs drywood termites.

Difference between drywood and subterranean termites 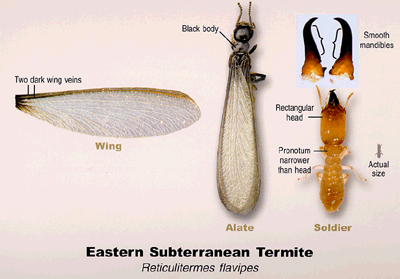 There are three distinct groups into which termites are divided: subterranean, drywood, and dampwood.

First of all drywood termites live in dry wood out of ground as they need very little moisture.

They build nests in wooden frames, trim, window frames and other wooden elements.

They can live even in the attic. In most cases, drywood termites eat wood, leaving only the thin outer layer of healthy wood, which protects them from inclement weather.

Therefore, the lesion is difficult to be found.

As for subterranean termites, they on the contrary live in raw land where they build their colonies. These are species nest in the ground and form huge termites.

In search of food they overcome vast distances, building closed tunnels between the nest and food. Subterranean termites cause much more significant damage than drywood ones.

Below you can find out the difference between colony organization of drywood vs subterranean termites.

Colonies of drywood termites are usually small — they are just hundreds (rarely thousands) of insects. They are very unpretentious. A small colony can live for years for example, even in a wooden desk.

As for subterranean termites, their colonies’ number is usually limited to a few hundreds to thousands, but sometimes up to 1 million.

Termites live in societies, so they are referred to social insects as ants, wasps, bees. Termites are inhabitants of their own kingdom. They have a king and a queen and subordinates: soldiers, workers, alates. The royal couple is guarded by the soldiers who protect them.

Subterranean termites have the head of all termites who is queen and a king who impregnates her. Compared to other termites, the queen is huge (till 10 centimeters in length). 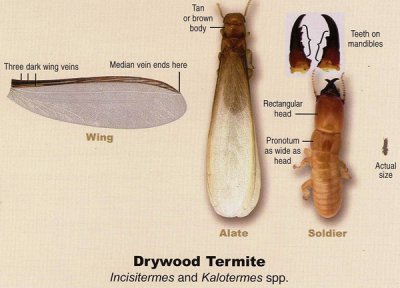 Queen’s body in the process of procreation increases in several hundred times, that’s why she is unable to independently walk and eat, and it becomes a concern of the workers carrying and nursing her.

The queen resides in a special section, in the middle of the mound, together with her king who is beside her throughout her life.

The king slightly exceeds the queen in size.

It slightly exceeds a termite-soldier. After fertilization, unlike ants, he does not die. The queen is very prolific and able to defer up to 3000 eggs.

Her lifespan is about fifteen years, and all these years the queen and the king keep each other faithful. During the existence of the pair, a few millions of termites appear.

Both subterranean and drywood termites have soldiers. Soldiers are wingless, often blind and usually have a large head with powerful jaws.

They are adapted to perform just one task — to protect the nest. If it is being attacked, the hordes of soldiers try to hold back the enemy’s advance until the workers repair the nest.

Most in the colony are workers. In most drywood species there is no true worker caste (subterranean termites do have a true worker cast); this function is taken over by immatures.

But subterranean termites have a soft white body and no eyes. And they are no longer than a centimeter. These termites are responsible for all work inside the nest – construction, caring for larvae and preparing food for other inhabitants of the mound.

Winged reproductives (alates) – are termites who are intended for reproduction, with well-developed eyes and powerful wings. They leave the colony and fly away, often into the wind. They fold their wings or bury themselves in the land and give life to a new colony.

After the birth of a sufficient number of new termites, they start to build a house – a nest. Amazingly, insects the sizes of ants have an incredible ability to build a huge castle with intricate labyrinths of the internal passages, rising above the soil surface for more than 8 meters. 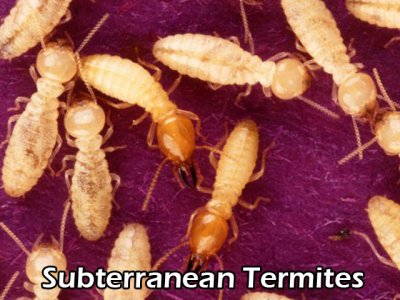 As mentioned above, subterranean termites need moist soil and darkness in order to survive.

In such conditions they build their nests in places where there is no frost.

They live in moist soil and in the tree, and when they need to overcome the open space, they build tunnels of clay material or mud for protection.

As for drywood termites, they build nests in old trees, wooden frames in houses, trims, window frames and other wooden elements.

It also depends on the region. In tropical conditions (high humidity and constant rain) termite nests are often placed high in the trees; I n arid regions (e.g. in Central Asia), termite nests are located deep underground without any signs above the ground.

Termites’ frass is material for construction of the nests. It may be ground mixed with termites’ frass or wood, passed through the gut of the insect.

What is interesting, it is as string as concrete.

Drywood termites extract as much water as possible from the feces to conserve it. The result is very distinct fecal pellets called frass. The termites kick them out of their tunnel. Appearances of these pellets indicate their activity.

Unlike the subterranean termites, drywood ones may be observed by their frass That’s why it’s recommended to act immediately and start to get rid of these termites. A trained pest control professional can provide a thorough inspection.

Termites’ frass is also known as the source of natural antibiotics. It helps to destroy many types of fungi and germs. Sometimes some king of fungi appears in termites’ nest which is used by them as food for larvae.

Termites are known as destroyers of buildings or goods made of articles of wood, cardboard, including paper and other cellulose materials. Imperceptibly penetrating into buildings from the soil, termites seriously hurt it before being discovered. 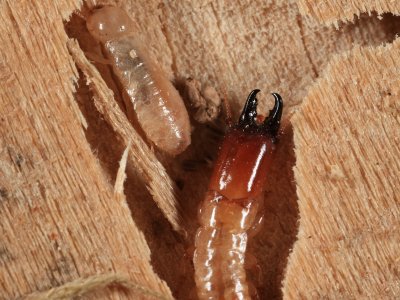 They spoil other materials and items, such as insulation laid in the ground cables, rubber products, synthetic films and plastic materials.

Termites are important and indispensable component of ecosystems and the biosphere as a whole.

But for humans the activity of these insects brings only annual damage estimated in billions of dollars.

The complex difference between subterranean termites and drywood termites:

Be careful as to deal with termites which have already appeared in the building is almost impossible. It’s easier to prevent their appearance. You should implement a number of precautions to minimize the possibility of termites. If you find termites, you should exterminate them immediately that is better to be done with the help of professionals.