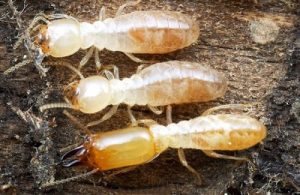 As a homeowner you might get this common paranoia of having your house infested with termites.

Any insect, resembling ant, has to be a destructive termite, the weird smell in the cellar must be coming from them, and those flying creatures surely are there to start a colony in your cupboard.

Ok, let’s take at least a small load off your shoulders. What the termites really are and how do they look like? 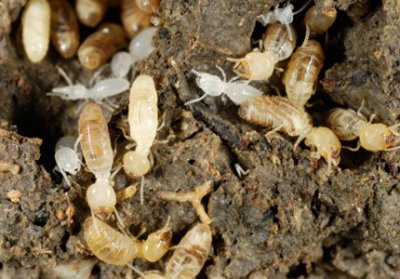 If you ask the question: ”Who is termites closest relative?”, 90 percent of people without a doubt will answer “ants”.

It seems to be so obvious! But, interestingly, termites are actually the descendants of a Jurassic wood eating cockroaches.

The oldest fossils were found in West Texas and belonged to the Jurassic or Triassic period.

Altogether, the fossil and modern termites have more than 3000 species and 12 families.

So, finally, termites belong to the family of Cryptocrecus, while ants are Formicidae family. All the similarities of their social habits and structure appeared due to the convergent evolution. Which means that they were evolving in similar conditions, that required the development of similar adaptations.

How termites are different within one colony?

The looks of termites can differ depending on their place in the colony. Generally, there exist three major casts in the nest:

Workers are foragers, they are the main consumers of the cellulose and providers of the whole colony. The soldiers are protectors of the nest; they need strong ammunition to withstand the attack. Both workers and soldier’s lifespan is around 4 years.

Reproductives are winged creatures that are also called alates. If they don’t find that place for the new colony after they swarm, they die in 24 hours. There’re also a King and Queen of the colony, but there’s almost zero chance you’ll ever see them.

Every cast has its purpose and adaptations that are making it easier to achieve their goals. So, inside one termite species there will be some differences in appearance and size of colony members. 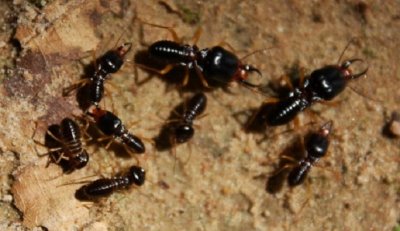 First of all, it is unlikely you will actually see any of the worker or soldier termites.

If ant-like insect is crawling in the open – it’s an ant. Termite workers you’ll see only if you break into the hollowed wood and catch them on crime scene, but then you’ll hardly need any identification to know it’s termites.

The easiest individuals to get are the alates – winged reproductives. At the certain time in spring or summer, alates emerge from the nest and swarm.

Attracted by the light, they often end up on the window and door sills of the house. This is where you can collect some samples and figure out what insect is it.

Usually, termites are between 0.16 to 0.59 inches in length. The soldiers are a little bit bigger than the workers, but smaller than the queen.

Their bodies consist of three parts:

Each of those three parts have a pair of legs, so it makes 6 legs per termite. The legs of the soldier termite are slightly larger and heavier. All body is covered in exoskeletal plates. The reproductive insects, in addition to the legs, have two pairs of wings.

Workers and soldiers of the termite colony are absolutely blind, so they don’t even have a pair of eyes. (except for some species, that have compound eyes that let them distinguish light).

The alates, that need orientation when swarming, have a pair of eyes. Termites lack ears also. The antennas of termites fulfill the eye and ear function. They also deliver the information about the heat, vibration, tastes and smells.

The color of termites can be different from light brown to almost transparent white. Soldiers often have their heads darker than the rest of their body. The head of the soldier termite can get as dark as black color.

Different casts of termites on pictures below: 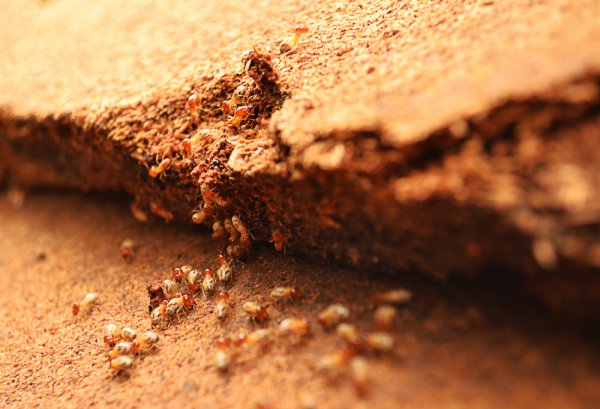 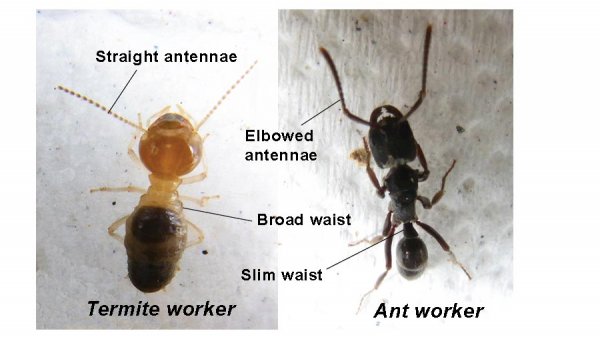 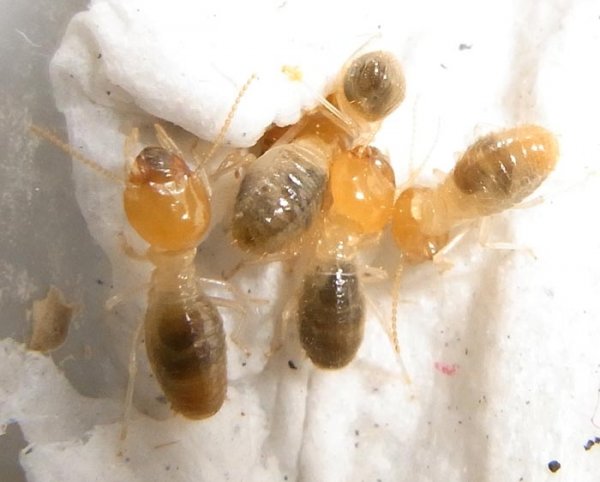 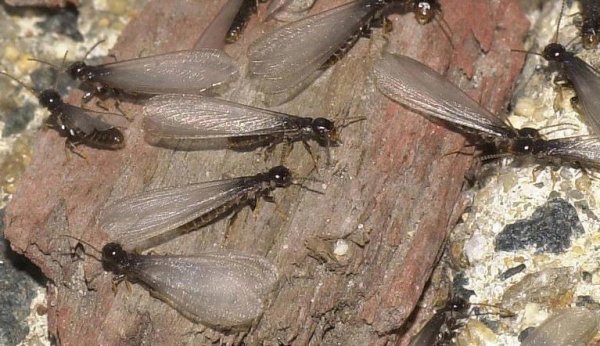 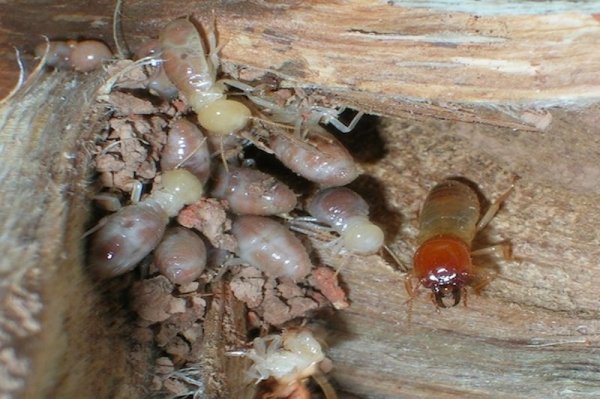 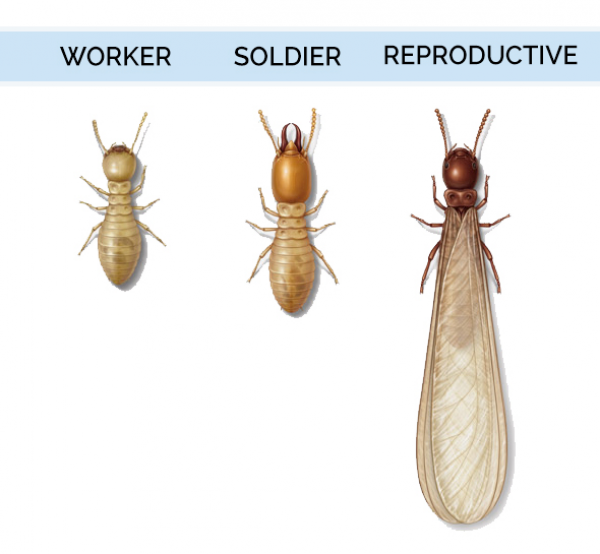 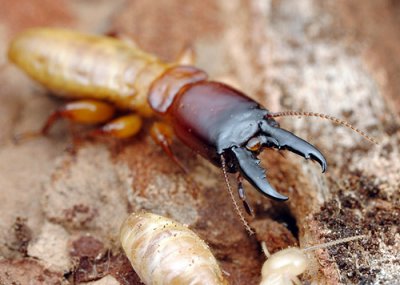 Many people have concerns about the musty odor in their houses and associate it with termites.

It is true that the termites use the pheromones for the communication and each colony has its own specific smell.

But, this scent is not detectible by the human nose.

Some time ago the Beagle dogs were popular for the termite location, as they are believed to be able to recognize termite pheromones.

So, if you have a musty odor in some areas in your house, most probably it simply means that there’s moist accumulating somewhere, that gives the wood this smell.

Nevertheless, this condition is very favorable for subterranean termites to get attracted by this wood. They need moisture to thrive and, if you have a water leak or wet wood, you might be attracting them.

What is the difference between ants and termites?

So, now, when we know that all the similarities between ants and termites are simply an evolutionary coincidence, how do we tell one from another? The easiest is if you have a winged reproductive at hand, but the signs work for any members of the colony.

The wings shape can tell you the information even if you don’t have an insect himself, but, for example, found some shed wings on your windowsill. The termites have two pairs of same size and length wings. The ant’s wings are different – the back ones are shorter than the front wings.

The body shape of the ants is quite well known for its thin pinched waist; you will not see such a feature in termites. As for antennas – the ants’ ones are elbowed, while termites have straight ones.

Those signs are quite easy to detect with a simple magnifying glass, so you won’t need an entomologist help. Some people think that if the insect in question is light-colored, it’s a termite for sure.

But you should not forget that there’re plenty of different ant species and they also can be a very light brown color, resembling the termites.

Advice! If you’re not sure in your entomological skills or you only found lots of shed wings, collect them in the plastic zip bag and bring for identification to the reputable pest control station.

How to identify different termite species? 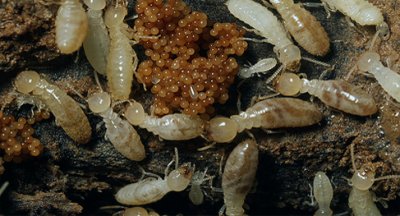 To tell the difference between drywood and subterranean termites according to their looks, is a not an easy task even for the professionals.

The workers and soldiers of both families are almost undistinguishable from each other. The colony members that can help you are the reproductives.

The wings of the subterranean termites are covered in microscopic hairs.

They also have two major veins and few crossed smaller veins. The drywood termite wings have a lot of small crossing veins and three major ones.

This difference is hard to see without proper magnifying equipment. So, if you decided to attempt the identification, better collect samples and bring it to the pest control office.

Otherwise, check for different infestation signs. The mud tubes or presence of frass can tell you about termites more than their looks.

What is Termite and what do termite look like: 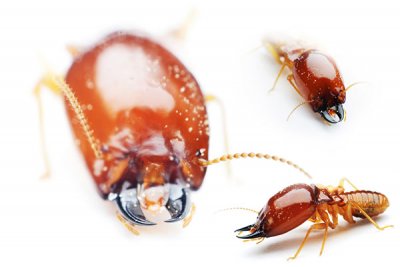 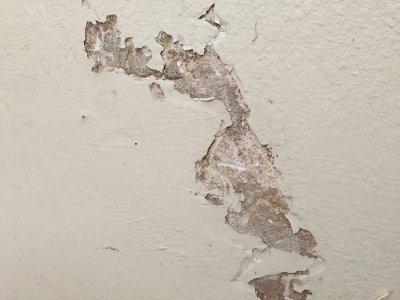 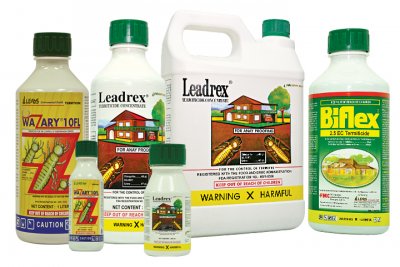 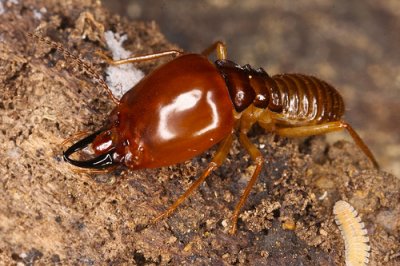 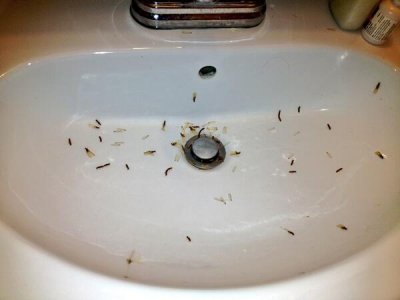